Above photo from Basel Action Network, 2004, approved for use.

Let Cascade protect your risk with our
Safe & Sound Solutions:

There's a cost to recycling electronics responsibly because of the hazardous materials contained in these products. But some companies offer to recycle e-waste for low or no cost as a means to get access to the valuable metals in electronics, while they unsafely dump or export the hazardous wastes. To protect your reputation, and to uphold the values of environmental justice, choose Cascade for your Safe & Sound IT Asset Disposition needs.

The owners of e-scrap processor Total Reclaim have been sentenced to 28 months in prison after pleading guilty to federal charges related to their export of LCD devices to Hong Kong. The Total Reclaim case has drawn regional and national media attention. The Seattle Times covered the sentencing hearing, describing the case as the “largest e-recycling fraud in U.S. history.” The Portland Business Journal referred to the company as a “notorious” electronics recycling operator.

This case points to the importance of companies conducting their own due diligence on recyclers to verify that their actions back up their claims.

Brian Brundage, CEO of now-defunct processor Intercon Solutions of Chicago Heights, IL, has been sentenced to three years in prison for fraud and tax evasion crimes. Brundage also was co-owner of EnviroGreen Processing of Gary, IN.

According to a plea agreement, Intercon marketed device destruction and recycling services, but it actually engaged in such activities as stockpiling, landfilling and selling intact devices to companies that exported them. It also issued false certificates of destruction and recycling to customers, which, according to prosecutors, included federal, state and local government agencies, as well as dozens of small and large private companies.

“Make no mistake: Intercon was a sham recycling company,” prosecutors wrote in a recent sentencing memo. “The overwhelming evidence is that from at least late 2008/early 2009, 75 to 80 percent of all materials that customer paid Intercon to recycle were fraudulently disposed of – either through reselling, landfilling, or stockpiling.”

This case points to the importance of companies conducting their own due diligence on recyclers to verify that their actions back up their claims.

E-Scrap News recently reported that 40 recyclers were named in an $18 million lawsuit tied to a 314 million pound stockpile of CRT glass abandoned at Closed Loop Refining & Recycling warehouses in Ohio and Arizona.

Superfund uses the "joint and several liability" approach to assess responsibility for hazardous disposal cleanup. That means that any one "potentially responsible party" may be held liable for the entire cleanup of the site (when the harm caused by multiple parties cannot be separated). This liability can extend up the chain to the companies or people that generated the material in the first place. The recent lawsuit may reach the customers of the electronics recyclers which sent the CRTs to Closed Loop for promised recycling.

This development points to an ongoing issue in recycling - when is something actually recycled? It's not when you put an item in a recycling bin. Read our thoughts on the challenge with recycling, "zero waste," and making sure items are properly recycled into new raw materials.

Improper storage of e-scrap at a Colorado prison has spurred a lawsuit involving the highest public officials in the state.

Two semi-truck trailer loads of e-scrap arrived at a prison in Cañon City, Colo. in December, according to a write-up in the Denver Post. The prison’s warden, Angel Medina, received a call from guards at the gate, info

rming him the material did not have proper clearance or authority, Medina claims in a lawsuit filed Oct. 2 in Denver District Court.

When Medina began making calls to determine the origin of the e-scrap, he learned that the executive director of the Department of Corrections, Rich Raemisch, had authorized the storage at Medina’s prison, according to the lawsuit. The suit claims Raemisch allowed the e-scrap to be stored at the prison as a favor for a friend of his.

e-Waste traced to improper exports to Asia by Goodwill and others, 5-9-2016

The Basel Action Network (BAN), in partnership with MIT's Senseable City Lab, released a 114 page report documenting how e-waste was traced from Goodlwill donation centers across the U.S. to primitive and unsafe e-waste processing sites in Hong Kong, China, Taiwan and Thailand. A related story was posted on PBS NewsHour segment entitled The Circuit.

“Unfortunately, we are seeing considerable backsliding in the electronics industry today compared to just a few years ago,” said BAN Executive Director Jim Puckett. “Toxic e-waste is flowing off our shores every day to substandard operations, harming people and the environment across the globe. Meanwhile, these exports deprive our own nation of green jobs and make it difficult for responsible electronics recyclers to compete and survive.”

Read BAN's press release with links to the full report and additional documentation and video.

Telecommunications giant Comcast has agreed to pay the state of California a hefty sum for illegally disposing of e-scrap and other devices over the past decade and for failing to protect customer information.

The cable TV and Internet provider reached a $25.95 million settlement with the California Attorney General and Alameda County District Attorney. If approved by a court, some of that money would fund a statewide public education campaign on proper e-scrap management.

Global Environmental Services, with facilities in Kentucky and Texas, filed bankruptcy papers and left behind warehouses of unrpcoessed electronics, bare CRTs and crushed glass. In addition, the company was earlier found to have buried e-scrap on its property.

HLT Properties leased space to GES in Texas. HLT's lawyer, Matt Bunch, wrote in the Nov. 18 filing that in Austin "the debtor has abandoned its recycled computer parts and byproducts and has been advised that piles of silicone/sand that are located outside of the building [are] laced with lead and lead dust."

This week a Kentucky news channel unearthed a CRT dumping ground near a processing facility owned by processor Global Environmental Services. The company, which also recently lost or withdrew from its environmental certifications, has since admitted to the wrongdoing.

According to a report published by Lexington, Ky. NBC affiliate LEX 18, GES met with state investigators this week and took responsibility for the dump, located approximately 100 yards from the Georgetown, Ky. facility of Global Environmental Services (GES). 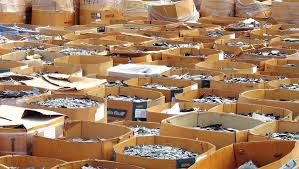 Materials Processing Corp., the Minneapolis-based e-scrap company fined by state regulators for improper storage of CRTs, has shut down operations. The Minneapolis Star Tribune reports MPC shut down in the wake of state fines, the loss of e-Stewards certification and a drop in commodity prices.

E-Stewards investigated and withdrew MPC's certification for one year after the Minnesota Pollution Control Agency levied a $125,000 fine against the company for stockpiling 2,500 tons of CRT glass in the Twin Cities area. MPC paid to move the material to a hazardous waste facility.

As much as 90% of the world's electronic waste is being illegally treaded or dumped, UN Environment Programme warns, 5-12-15

Up to 90 per cent of the world's electronic waste, worth nearly $19bn, is illegally traded or dumped each year, according to the UN Environment Programme (UNEP).

Computers and smart phones are among the ditched items contributing to this 41 million tonne e-waste mountain, which could top 50 million tonnes by 2017, UNEP says in a new report launched today in Geneva. "We are witnessing an unprecedented amount of electronic waste rolling out over the world," said Achim Steiner, UN Under-Secretary-General and Executive Director of UNEP.

Michigan resident pleads guitly to conspiracy to violate customs and environmental laws regarding export of e-waste, 3-13-15

Michigan resident Lip Bor Ng, also known as Paul Wu, 52, pleaded guilty before Judge Mark A. Goldsmith to a one-count conspiracy information, which charged him with conspiring with others to knowingly submit false and misleading export information to the United States,  to fraudulently and knowingly export electronic waste in violation of United States law and to export hazardous waste without filing a notification of intent to export with the U.S. Environmental Protection Agency (EPA).

City suspends recycling of e-waste due to issue with contractor, 2-5-15

The pile continued to get bigger and bigger at the city of Waukesha's Drop-Off Center over the last few months. With the company that had been cleaning up that pile having "a hard time keeping up financially" to meet the needs of the municipalities it serves in Waukesha County, the local Drop-Off Center, 900 Sentry Drive, has stopped accepting TVs and other electronics until further notice. Dustin Nolan, the city's recycling and solid waste coordinator, made the announcement last week and informed the city's Board of Public Works that 5R Processors, the contracted company, was not keeping up with the number of recycled electronics generated within the city. In fact, the last time the company cleared out the city pile was around Thanksgiving.

The Basel Action Network (BAN), a global environmental organization working on toxic trade, discovered that Diversified Recycling, an electronics recycler operating in Orlando, Florida and Norcross, Georgia, was recently engaged in transporting daily tractor-trailer loads of toxic TVs and computer monitors to a small warehouse operation where cathode ray tubes (CRTs) were smashed by hand and then dumped in a local construction landfill. BAN also traced a trans-Atlantic container shipment of electronic waste containing non-functional LCD equipment from the same warehouse firm known as Sarah’s Trading, to Asia. Both the dangerous smashing and the export and dumping of electronic waste are likely to violate numerous local, state, and federal laws.

Telecommunications giant AT&T has reached a $52 million settlement with the state of California for illegally dumping scrap electronics in state landfills.

The settlement was announced on Nov. 20 by California's attorney general and was decribed by state officials as their first e-scrap management enforcement action against a telecom company.

Stone Castle Recycling, previously one of Utah’s largest recyclers of electronic waste, has abandoned its three facilities and the owner is missing. The company has ceased all operations and has left behind several warehouses and yards filled with an estimated 7,600 tons of toxic electronic wastes and charred residues. According to US EPA representatives in Denver, the owner and CEO of Stone Castle, Anthony (Tony) Stoddard, has simply disappeared and is now being actively pursued by law enforcement authorities.

For more stories about the problems of improper e-waste management in the U.S. and abroad, see the following resources:

How Cascade protects its customers and the environment:
Cascade's e-Stewards certified electronics reuse and recycling process provides the best assurance that our customers' equipment is processed responsibly and that their e-waste won't end up as a tragic incident and news headline.

Through our annual downstream due diligence audits, we review and verify that all our vendors are not accumulating toxic materials and are properly processing them for final reclamation and treatment. Cascade performs a comprehensive audit of its downstream processors who handle hazardous electronic equipment and problematic materials or components. The audit requires the completion of an audit questionnaire, a site visit by Cascade or contracted auditing partner (unless the company is e-Stewards certified), and a review of claims made by the processor.  Cascade personnel will contact their local environmental regulators, confirm activity with their own downstream processors, and search for public reports of the company.  Cascade then executes a contract, agreement, or shares a listing of requirements with each qualified processor to ensure that both the interests of our customers and our company are protected.